WOW! What a fantastic turn-out for our recent Inter-Club beam and trampette competition! The hall at Oakwood Sports Centre was full to bursting with spectators ready to support the children during their performances. 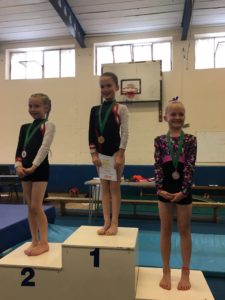 Phoenix, Lily and Harriet looking proud with their beam medals.

We started off the competition with the Beam and it was great to see all gymnasts putting in so much effort on this tricky piece of equipment. First up was the Intermediate Gymnasts (2005-2008) and Carmen Bulger, who trains with Head Coach Georgie at the Jubilee Community Centre in East Grinstead, put in a solid and confident display to take home Gold ahead of Kate Trimbell from St Bede’s and Eloise Murphy from Oakwood. Eloise’s sister Lily took home the Gold Medal in the Intermediate category for those born between 2009-2011. She held her nerve to put in a strong performance to finish ahead of Phoenix Hogan and Harriet Jones. The final category in the Intermediate section was on the high beam and we only had one entrant – Jazmine Hogan – who performed so well in her last beam performance for Springfit that she scored enough to take home the gold medal.

Eloise and Katie on the Podium.

Moving onto the advanced levels the moves  got even tricker and included cartwheels, back walk-overs and back-flip dismounts! The spectators were highly impressed with all the performances and all the gymnasts showed great determination to complete their routines and even if they did come off they just got back on like nothing had happened like true professionals! Chloe Forward, who trains at Hazelwick with Head Coach Steve, stormed to Gold on the medium beam and Katie Vaughan took Gold on the high beam ahead of Oakwood’s Eloise Saunders who at only 9 years of age showed great maturity in her performance – definitely one to watch in the future!

After a short break and change of equipment , we moved onto the Trampette ,which is probably our most popular competition equipment! Grade 1 competitors had to complete 4 jumps off the trampette – Straight, Piked, Straddle and Tuck. Eloise Murphy added a Gold to her Bronze from the beam in the 2006-2008 age group ahead of fellow Oakwood gymnasts Abigail Winton and Niamh Lesova. Next up was the 2009 age group and Copthorne gymnast Lola Ryan took Gold ahead of Lily Murphy, who also added to her medal haul, and Faith Lambert from Hazelwick. Copthorne gymnasts took Gold in the next two age groups with Saskia Spencer and Ava Whyton both taking Gold in the 2010 and 2011-2012 categories respectively. A special mention to Zach Wright who is only 4 but took a bronze medal in his first competition, behind Ava and Zoe Murphy in Silver.

Moving on to the next grade gymnasts had to complete straddle, pike, half and full turn jumps. In the 2005-2007 age group it was very close between Katie Adams (Jubilee) and Erin Wilson (Copthorne) with Katie taking Gold by just 0.1 points! Chloe Forward was another double medalist taking Gold in the Grade 2 2008 age group and in the final Grade 2 age group (2009-2011) Oakwood’s Emily Dobbs, Phoenix Hogan and Thailia Wright (Copthorne) took home Gold, Silver and Bronze respectively. Stepping up to Grade 3 meant another increase in the difficulty of the jumps completed with dive rolls and front somersaults joining the twist jumps. Head Coach Katie was continued to be amazed with the Copthorne gymnasts performances with Rachel Barrington and Erin Finney taking Gold and Bronze with Bobbi Kuhler (Oakwood) taking the Silver in the 2004-2007 age group. Another Copthorne gymnast, Sofia Booker, split twins Emily  (Gold)and Isabel (Bronze) Gouveia Correia (Oakwood) in the Grade 3 2008-2009 age group on the medal podium. Finally Jazmine Hogan and Katie Vaughan took gold in the Grade 4 and 5 respectively where their jumps where even more complex and included tucked and twisting somersaults, piked baranis and  dive rolls!!

Well Done again to everyone that took part and the full results can be found HERE.