Springfit Trampolinists jump into the medals!

Congratulations to all the trampolinists who took part in the Springfit Trampoline Invitational held last week at Moor House School in Oxted. Over 50 trampolinists turned out from 6 clubs from all over Surrey and Sussex and we would like to thank everyone that turned up to support their trampolinists as well the coaches, judges and spotters from all of the clubs – without you all there would not a competition!

The first half of the competition was for the Level I and G competitors and there were great performances from trampolinists from Flite Crew, Anti-Gravity and Epsom and Trampoline Club (EGTC) taking the medals in the first two age groups.

8 year old Ella-Louise Bentley, who trains at Oakwood Sport Centre with Head Coach Georgie , took Springfit’s first medal in the Level I 2007-2008 age group with a well deserved Silver medal. Katherine Bailey, who has recently decided to focus on trampolining but is also one of our Assistant Gymnastics Coaches, took a Bronze medal in the Level G category with a routine full of half and full twists, somersaults and jumps! A special mention to Ellie Buss from EGTC who was awarded the Marie Manhire-Clark award for effort.

The second half of the competition saw a handful of medals being awarded to Springfit members, starting off with our first Gold medal going to Sophie-Louise Naylor in the Level H – she was over a point clear of her closest rival. Maddie Austin gained another Bronze medal (Level H) to go with the one she won in our November 2016 competition. Mark Dean was competing his first competition and his coach Dani was watching on proudly as he put in two strong performances despite some nerves. Routines full of piked jumps, seat  and back landings saw Lily Murphy take Gold in the final Level H category for 7-9 year old and Max Devulder took a well deserved Silver in his first ever competition.

We would also like to congratulate Shaye Chubb on putting in routines full of determination as she overcame her nervousness with regards to front landings and also performing in front of a crowd. For the immense effort she put in she was awarded the Marie Manhire-Clark Trophy for effort – Coach Alex is very proud of you.

The final two categories were our highest grades and the routines were full of baranis, somersaults, straddled and piked jumps! Elite trampolinists Jacob Budd and Charlie Claydon took Gold medals in Level F and E respectively and both coached by Head Coach Adam at St Bedes who was very pleased to see them both put in solid performances. Fellow St Bedes trampolinist Lara Cawkwell took Bronze behind Jacob.

As usual the competition closed with the Synchro routines and sister Eliose and Lily Murphy took Gold ahead of Sophie-Louise Naylor and Lily Woolsey but it was a close competition as there was only 0.1 points between them! 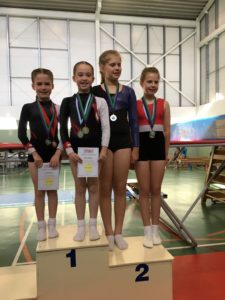 Again we would like to congratulate everyone that took part and thank everyone who helped make this event such a resounding success.