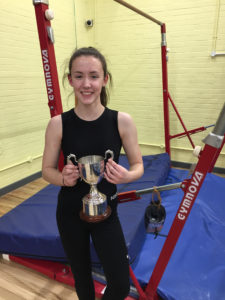 Everyone at Springfit would love to congratulate 14 year old Eloise Budd on being awarded the Fay Greene Trophy for effort in 2017.

One individual from any of our gymnastics classes (over 600 gymnasts!) can be chosen and it is based on who has shown the most overall progress in the last year. All six head coaches at the club discussed and deliberated who deserved the recognition, considering levels of dedication, achievement, competition, attitude and performance among other important skills taught in this hugely beneficial sport.

The trophy was presented to the club back in 1998 by the parents of Fay Greene; a talented gymnast who was so enthusiastic about the sport that her family wanted her passion to live on through the club in the form of this prestigious trophy.

The 2017 winner Eloise has been a member of the Club for a very long time and in September last year she was invited to “Elite” class and Coach Plamen says that she is “one of the gymnasts that tries the hardest to get the moves she works on and she has a true passion for gymnastics!”

Eloise also trains with Plamen and Head Coach Steve at Hazelwick School in Crawley, and it has been noted that she sets a great example for what a teenager’s attitude should be towards other gymnasts and coaches in the advanced class there. She is respectful to the other gymnasts in the class as well as the coaches, and she never argues! Her level of maturity has also been recognised, which has lead to an invite into coaching the younger children in other classes and she carries this attitude into the way she works when coaching.

Over the years Eloise has taken part in a number of competitions winning Bronze in the 2015 Pointers Tumbling competition as well taking Gold in Beam (probably the hardest discipline) in 2015 and earned another podium finish in Grade 2 Pairs at the Acro competition in 2016.

Eloise has been described by another Head Coach she works with as  “a beacon for other members, representing everything we hope for, for all our Springfit members. She is fully engaged on every level within the club with a wonderful attitude and determination to be the best she can be.”

Club Manager Adam Reynolds proudly presented Eloise with the trophy in front of her peers, and she is pictured hear with the award to treasure for the duration of 2018, which the coaches keep a keen eye on the next winner.

Again well done Eloise and keep up the good work!