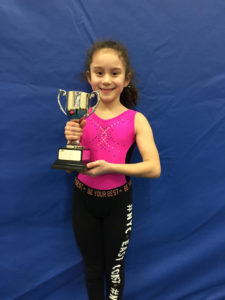 We would like to congratulate Emily Gouveia Correia on being awarded the Elite Gymnastics Trophy for 2017.

Head Coach Plamen and his team have been astounded by the MASSIVE progress Emily has made in one year. Until a few months ago Emily had only been training with Springfit for one hour a week and she moved quickly from our Intermediate to Advanced class on a Saturday at our Oakwood training centre and in September she invited along with her twin sister, Isabel, to our Elite Training session.

Despite her tender age of only 9 years and small stature, she has amassed a great number of skills such as being able to handspring ‘5 High Vault’, back handspring and free cartwheel and so it no surprise that she won a well deserved Bronze medal in the hardest category (Grade 6) in our Floor and Vault competition in November 2017. This was in addition to the Gold medal she took home from the trampette competition in July – being able to front somersault off a trampette is no mean feat and is worthy of a Gold!

It is not only her skills and huge improvements that have brought her to the attention of the coaches, Head Coach Plamen described her behaviour in class as always being “fantastic” and that it is a pleasure to have her in his classes.

Again WELL DONE Emily and keep up the good work!

Trampoline Competitions are BACK!
24th May 2022
Do You Have a Question?
What our members think of us!

Teagan really likes the classes and finds it fun to do. In regards to Covid, everything feels safe and well thought out. It is great to be able to return to classes.!

Thank you for all that your team have done with the boys, they thoroughly enjoy the classes & make great progress in terms of developing the fundamentals of balance, coordination & strength. Your coaches were all brilliant with the little ones & Sharley in particular is a real asset to the squad.

Parent of Colbie P – 5 *****
“Thanks so much for the competition on Sunday! I was really impressed with how efficiently it ran and how quickly you got through all the routines and vaults.
Your kind words of encouragement really helps her confidence. She was a bit sad to not win a medal but I reminded her there were lots of positives to take away – she achieved a new vault and learnt lots of new skills on floor! She loved seeing her backward roll to handstand in the YouTube video as she only mastered that a few days before the competition. She also choreographed her whole routine by herself this year and worked really hard with the little ones in the class she volunteers in, helping them to learn their routines too. She is working on her confidence and to believe in herself a bit more thanks to all that Springfit does for her 🙂