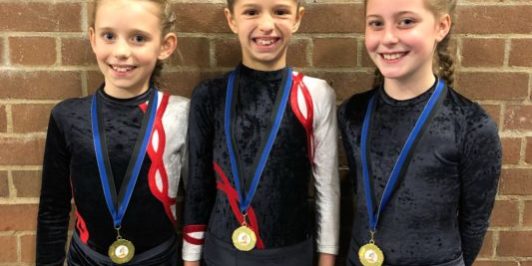 Springfit gymnasts representing classes from each of our five venues took part in the annual acro competition in Warlingham on Sunday 29th April, bringing home 19 medals in total!

Various combinations of pairs and trios got together in their classes at the beginning of the year to begin practising counter-balance moves and tumbling skills as part of the competition criteria. They then started choosing which partners and moves would best show off the skills they have learned and several found an interest in wanting to compete against other groups. Each of the acrobatic elements begun to be choreographed into a cohesive routine and strong partnerships developed. The children enjoyed coming up with dance elements and adding their own choice of music to make a rounded and unique routine which would show spectators and judges their own style and personality.

There was an impressive array of balances and tumbles from the younger gymnasts at entry level, grade one, who rolled and cartwheeled around the competition floor with huge smiles on their faces. As the event progressed on to the more advanced grade four level, the audience enjoyed seeing gymnasts somersaulting off their partners’ shoulders, being thrown in the air and back flipping with style and finesse.

Scores were so tight there was less than one mark separating the top three positions in all categories. In fact, there was only 0.2 marks between first and third places in some groups, which shows the high skill level of all of the performances.

Many routines proved memorable for the judges and audience alike, which is testament to the coaches creativity and the way they work with gymnasts’ ideas. The class members themselves are encouraged to come up with elements they would like included, so there were a few instances of the “floss” dance move phenomenon and plenty of ‘sass’ from confident youngsters wanting to make an impression on the judges. They certainly managed this, and whether they achieved a medal or not, everyone enjoyed the event.

Providing fun and friendly classes is part of the Springfit philosophy, and competitions follow in the same vein. It’s a great confidence building activity and as you can see from the pictures below, it is a great showcase for the talent of the young gymnasts who work so hard in classes.